This Book Belongs to Commander F. A. Worsley 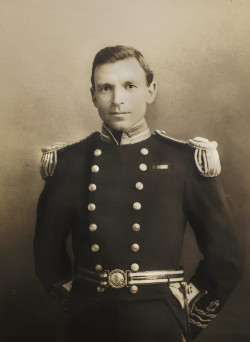 A sailor and explorer, he won renown through his navigation of the boat James Caird across the Southern Ocean in 1916, ultimately saving the men of Ernest Shackleton’s Imperial Trans-Antarctic Expedition (1914-17) after their ship Endurance was crushed by ice.

He was also awarded the Distinguished Service Order medal twice during the First World War, among other achievements on his rather extraordinary curriculum vitae(external link).

With all the daring-do in a life of exploration and risk-taking, it might come as a surprise to find that Frank Worsley also had a creative side.

Not only was he an engaging writer, but he also drew and painted. Akaroa Museum’s Frank Worsley Collection contains a sketchbook — a rare compendium of Worsley’s artwork, which, not surprisingly, is nautically themed. Worsley wrote in his autobiography First Voyage in a square rigged ship:

…I started making pencil drawings of every ship we passed and several of the Rakaia and Wairoa. These were in great demand with the master, the mates and my two chums.

I also made a few paintings of the Rakaia and other ships; but my sketchbooks lie under the ice 900 miles from the South Pole, so that those rough records of a vanished beauty, for what they were worth, are lost.

Seamanlike accuracy rather than beauty was what seamen demanded. My artistic efforts probably complied with this.

With much of his body of work either dispersed among crewmates or lost when the Endurance sank, the sketchbook in Akaroa Museum is not only very rare, but highlights a different side to Worsley’s character than is normally focused on in the Antarctic literature.

On its first page, a pencil-drawn book plate declares ‘This book belongs to Commander F. A. Worsley DSO, OBE, RD, RNR’. The awards after his name help confirm the sketches date from after the First World War. 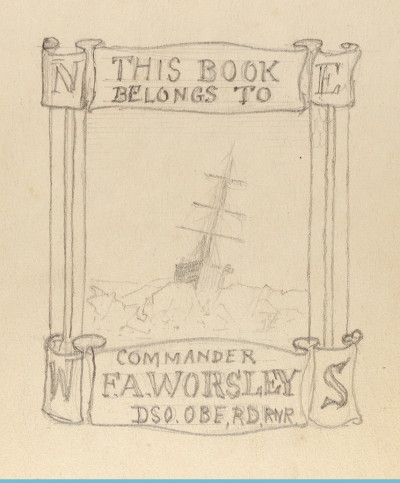 The book plate’s motif is the ship Endurance trapped in ice. This image is instantly recognisable thanks to surviving photographs from the expedition.

Later in the sketchbook are four book plate designs (including the one used), three feature a ship and icebergs, gesturing to personal symbolic importance of the Antarctic voyage. 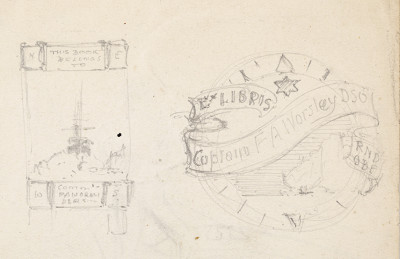 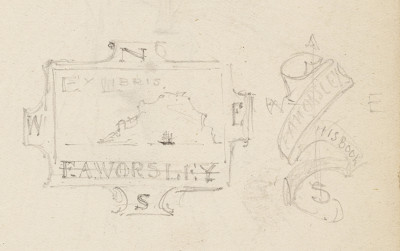 15 Knots is one of the few drawings in the sketchbook worked into a completed state, including title and signature. 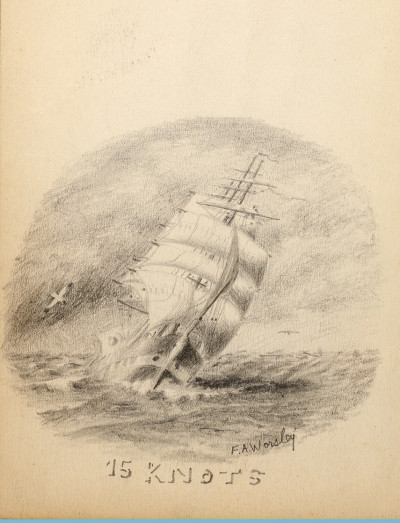 Reading passages from First Voyage alongside Worsley’s drawings gives an insight into why most of the sketches are of ships.

Sailing ships were Worsley’s great love, ‘[a]ll ships at sea are beautiful’ he wrote, but his greatest admiration was reserved for clippers.

These three-masted merchant ships improved world trade and communication during the nineteenth century through their speed. They were also the type of ship he trained on as a cadet seaman, when he literally learnt the ropes.

There is nothing more beautiful in heaven or earth than a perfect clipper ship with studding sails alow and aloft, every sail set as it should be set and every sail drawing while she buries her lee rail to a strong beam wind.

This quote occurs in a passage where Worsley is relating a debate with one of his shipmates on the abstract concept of beauty and helps to contextualise his artistic pursuit.

There is nothing more beautiful…

Below are four more of a total of nine clipper ship sketches. Three of these are on a smaller sized page, inserted into Akaroa Museum’s volume. 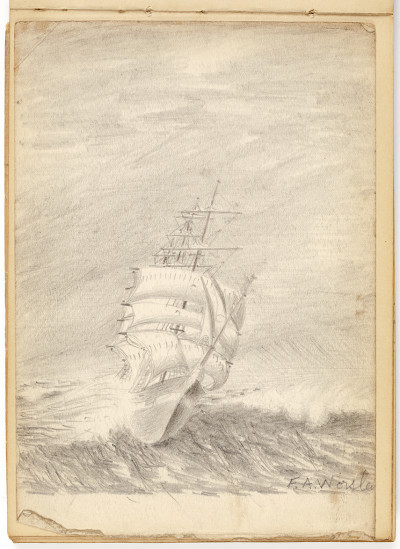 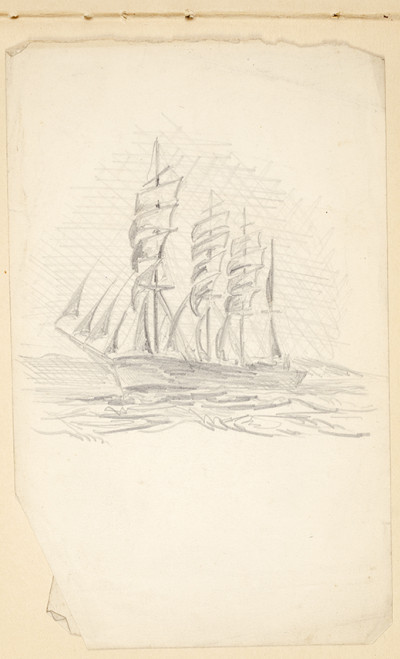 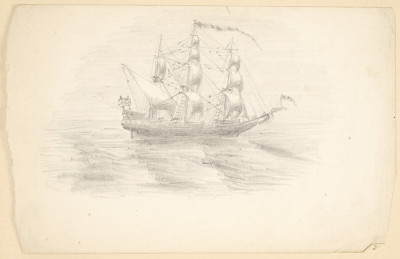 The untitled work below (another of the nine) could almost have been drawn to illustrate Worsley’s description of the ‘sturdy ship’ of his first voyage as it slid ‘...at ever-increasing speed down the front of the racing liquid hill.’ 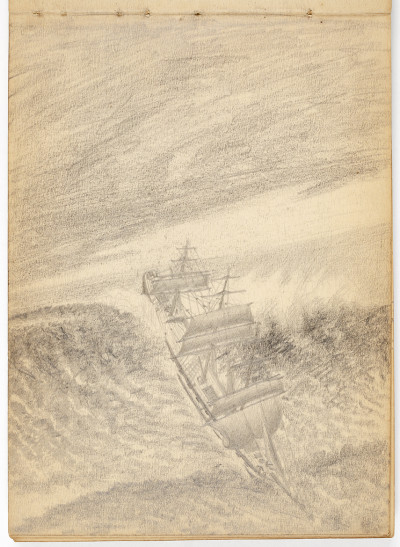 ...in spite of my sickness the grandeur and clamour of the gale fascinated me; the incessant and unending variation of attack by each sea, the brave fight of the sturdy ship….

These sea bird silhouettes are reminiscent of the bird details in 15 knots. They have the feel of being drawn from a position looking upwards from a ship’s deck. 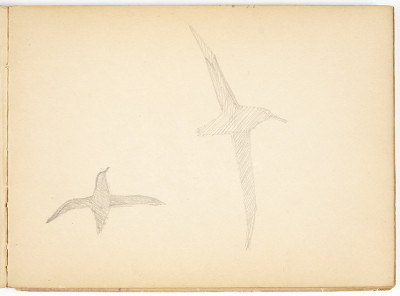 Another completed drawing is of a twin-hulled vessel. It is likely that this was drawn from memory, since Worsley spent the early part of his career, around the turn of the century, sailing in the Pacific. 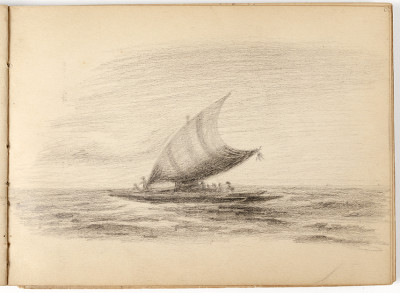 Perhaps the most iconic image is one of the last drawings in the book and it returns us to Worsley’s connection to the Antarctic waters that we saw in his book plate designs.

It is captioned: Tabular Berg 200 ft. above sea; 1200 below. An old waterline cutting diagonally across existing one. 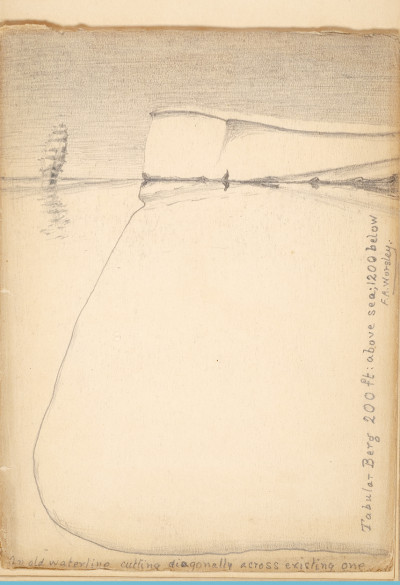 This sketchbook is not currently on display at Akaroa Museum, but there is a display about Frank Worsley and his amazing life.

‘Salute to Adventure’ includes the ensign from the ‘Q-ship’ he captained when he sank a German submarine during the First World War (by ramming it), and the dress set of the medals he was awarded including his Polar Medal with bar, OBE, and DSO with bar.

Under the Orange traffic light alert level, anyone aged 12 and older entering Akaroa Museum will require a vaccine pass. Please sign or scan in and wear a mask.