Helen Brown* writes Amiria made traditional ceremonial garments such as kākahu, as well as practical items like kete and kono (food baskets) for her whānau and hapū.

She also supplied various items to the ethnological collector Louis Vangioni, whose collection is now part of Canterbury Museum, Christchurch.

Akaroa Museum has a piupiu and the kahu huruhuru pictured below, both made by Amiria. The latter was made for her granddaughter Meri Tainui about 1940 who donated it to Akaroa Museum.

Her materials – muka (harakeke fibre) and houhi (lacebark) – were sourced from around Ōnuku. Brown writes that ‘Mokopuna were frequently called upon to chase geese and pull out their tail feathers for their Granny’s weaving.’  While Waitai Tikao recalled, ‘she wanted every bird feather she could get’.

The feathers used on the garment below come from a variety of bird species, including chicken. 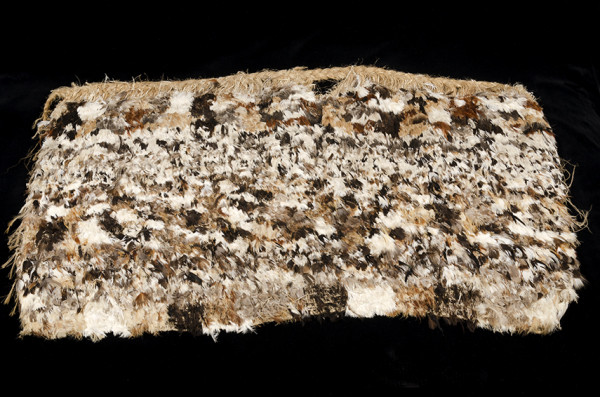 The Museum also has three kete described as originating from Ōnuku, although the creator is not known.